We want you to 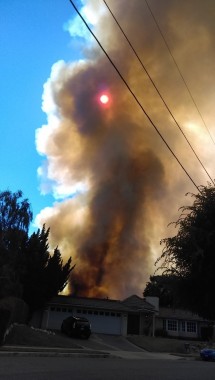 know we are OK now – and our house was spared from the fire.

Yesterday at 4:10 PM June 4, 2016 our electricity went off for a couple minutes – and then came back on.  A few blocks away an SUV ran into a power pole, knocking off the transformer causing it to explode when it fell, starting the fire.  At 4:45 PM I took this photo two blocks from our house.  During the fire 5,000 people were evacuated – many from Adamsville Street, less than a block away.  This evening the City of Calabasas announced 516 acres were burned, 400 firefighters battled the fire, and at 6 PM tonight the fire was 80% contained with NO houses lost in the fire!  We give thanks to our firefighters and all the other agencies who worked to save our homes and our lives.

From this simple photo, the fire rapidly grew in intensity.  We saw:  huge plumes of smoke – moving around us from one area to another as the fire moved left and right up the Santa Monica Mountains National Recreational Area behind our homes, at least 10 helicopters were whizzing around our heads – several dropping water, some Fire helicopters assessing the area, plus several news helicopters photographing for all to see – live.

We had planned an evening with four friends to eat paella, which Alan learned how to cook a few weeks ago in Marbella, Spain.  He even bought a large paella pan.  Two friends, Tom and Jill, arrived at 4:30 PM, commenting on the fire.  I called 911, but the fire had already been called in.  Alan continued cooking, while we discussed the fire and drove around looking at it ourselves.  Alan’s son, Adam, called; talked to Alan and arrived shortly with a huge number of re-usable bags to help us pack up our irreplaceable treasures into his and our van.  So Adam, Tom, Jill, Norma and Alan (with interruptions for cooking) packed up our family photos, family keepsakes, computers, phones, contents of the safe, and business stuff.  Very quickly and efficiently.  Both vans were soon full.  Our second couple tried to join us at 7 PM as planned, and the police turned them away at the bottom of our hill – too much traffic due to evacuations and fire engines.

About 7:30 PM Adam walked further up our hill and talked to firemen and police.  He was told our home was safe now because the fire had turned other directions.  Smoke now filled the air and it became very difficult to breath outside, so we all went indoors in the AC and our hard working air filter.

Now we were tired, the adrenaline was wearing off and we were hungry.  Thank goodness Alan had finished the gorgeous pan of paella, filled with an abundance of seafood:  halibut, shrimp, scallops, squid, and crab.  Jill said it was the best she’s ever tasted – we all agreed.  I hope he remembers the recipe, which he enhanced with zucchini and eggplant; we’ll want him to prepare again.

This morning we started putting everything back in the house – dusting and cleaning off as we went.  It was about 5 PM when I re-installed our computers and micro-cell for our cell phones.  We saw many messages and began to respond to them.  Alan and I still have some family pictures to put on the wall, but our home is almost back to normal.

We are extremely thankful this evening for being safe and cared-for so well.